Yesterday I received a present in the mail from a friend of mine.  I was her supervisor when she was a student employee several years ago, and we’ve thankfully still managed to stay in touch over the years in spite of geographical distance.  I served as a job reference for her shortly before and after she graduated when she was embarking on her professional career–and I was more than happy to do that for her.  I’ve always found her to be a brilliant, personable, diligent, enthusiastic, and charming person, and I would still recommend her to any prospective employer without hesitation.  Lucky for her, she has plenty of other people to use as job references these days.

She and I both share common interests in books, movies, and TV shows, so we are never at a loss for topics of conversation.  So several years ago, when I completed the first of my two self-published novels, I gave her a copy because I was interested in her feedback, since I respect her opinion.  Because of the sincere person she is, she was naturally very complimentary and supportive of my writing.

We’ve both been encouraging and supportive of each other in our respective endeavors over the years–hers being art (she is a gifted artist–more on that shortly) and music.  She also recently made a decision to consider some more divergent career paths, which I have also encouraged–because I have no doubt she’ll be successful at anything she sets her mind to.

So, back to the present I received from her yesterday.  This is what she sent me: 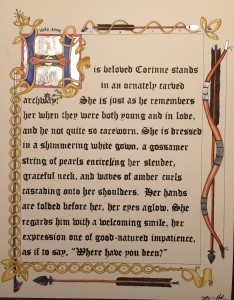 It is a passage from my first self-published novel, The Last Archer of Laummoren, and the photo doesn’t do it justice.

When I opened the package, I had no idea what to expect–and never would I have imagined that she would have devoted so much of her time and talent to something like this for me.  I’ve never received such a thoughtful gift ever before from anyone–not even my ex-wife, to whom I was married for over sixteen years.  I was literally humbled.

Hence my lesson in humility.

I’ve reached a point in my life, based on events the past several years, where I’ve started to wonder if I can be surprised by anything anymore.

The generous gift I received from my friend yesterday is proof that I still can.

And it is that gift–almost as much as the gift itself–that I truly appreciate.